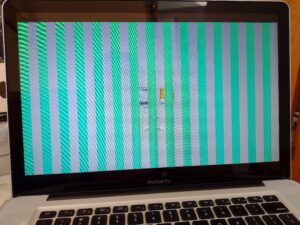 The 15″ and 17″ Macbook Pro from 2011 are known for their dGPU failures (AMD-GPU). There are both software and hardware hacks to turn off the broken dGPU and use the iGPU found on the Intel processor.  The easiest is, of course, a software fix, the only problem with the software fix is that the fix will disappear after an NVRAM reset.

The UEFI bios on the Macbook has a varibale which instruct the bios as to which GPU to use.

The catch22 is that you can only set this variable from a booted system, but it can be impossible to boot if the dGPU is too broken, So what can you do?

I had originally planned on the last solution but I can still boot my MacBook from USB, so I will settle for a software-only solution.

Here is what I did:

chroot into the just installed Ubuntu

To make apt and other commands work on the newly installed Ubuntu partition while still booted on the USB stick, you need to have access to parts of the current root filesystem.

Just open a WEB-browser on this page, and copy-paste the commands below:

Note that we have not set the EFI variable that instructs the BIOS to only use the iGPU, so we will see a garbled screen just after power-up if we stop here and reboot.

Set UEFI  variable to only use iGPU

Under Linux you read and set UEFI variables under /sys/firmware/efi/efivars and to instruct the UEFI bios to use the iGPU all that is needed is the to set the correct variable to the proper value like this:

Now we are almost done

Make sure the dGPU is powered off

The only problem left is that the BIOS might power the dGPU back on after sleep (laptop lid closed)  This could of course be fixed by performing the 4 outb instructions above, either in a stand-alone program called from /etc/acpi/events/laptop-lid, or through adding them to DSDT, but the easiest is to just remove the resistor R8911 which powers the dGPU 2011 MacBook Pro Video GPU issues successful repair with images

This entry was posted in Linux, Mac. Bookmark the permalink.